We’ve reached the final Halloween costume in my series of outfits that have a pinup spin. I debated whether or not to even bother including a witch in the series, as it’s widely regarded as one of the laziest of Halloween costumes, alongside the devil and a black cat. That though, I decided, was the beauty of it. If you put a lot of effort into them, even those over-used characters can produce a great costume. You can go to town with intricate makeup on a level akin to face painting, you can craft and create detailed accessories that flesh out the character. Or you can do what I did, which is grab a bunch of black things out of your wardrobe, add an old broom you had lying around from a Harry Potter costume for your niece a few years ago, and a 50p witches hat from Asda. A pinup witch is an excellent option if you’re on such a strict budget that you don’t want to spend out anything at all to make your costume, because I bet you have enough black pieces in your wardrobe to put something together, and also a great option for a last minute costume you weren’t prepared to need.

Personally, even though it’s predictable, this was my absolute favourite costume of the bunch. There was something so fun about layering as many black items of varying texture as I could to make this costume, probably because I’m typically a girl who loves to wear bright colours and tends to overlook plain black pieces as they can feel more formal to me. I enjoyed the change to take on the bad witch character in contrast to the sweetness of my other earlier costume ideas of Snow White and Dorothy from Oz, and that is something else I feel recommends the witchiness; in addition to being easy and cheap (how dare you!), with this costume you get to be as mean and bad as you want. Which is fun. And you also get to cackle. Which is also fun. Plus there’s this.

I mean, come on. That’s just awesome. Sexy vintage Halloween witch, consider me sold! And now let’s have a look at what I put together. 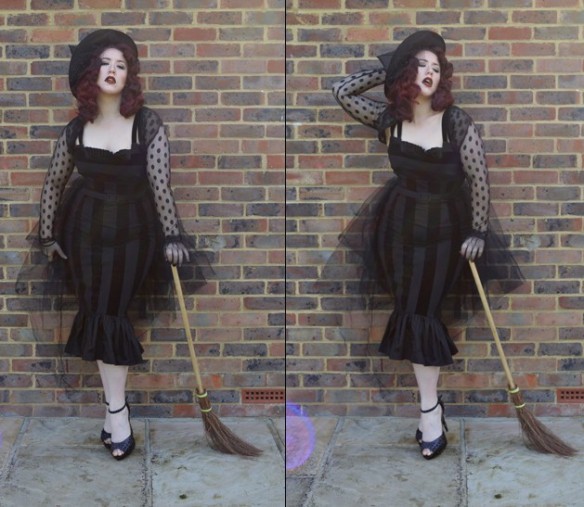 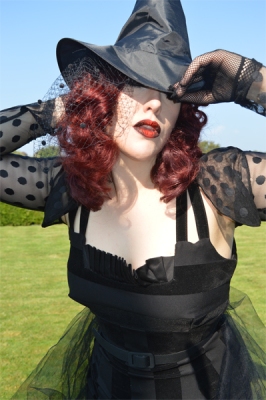 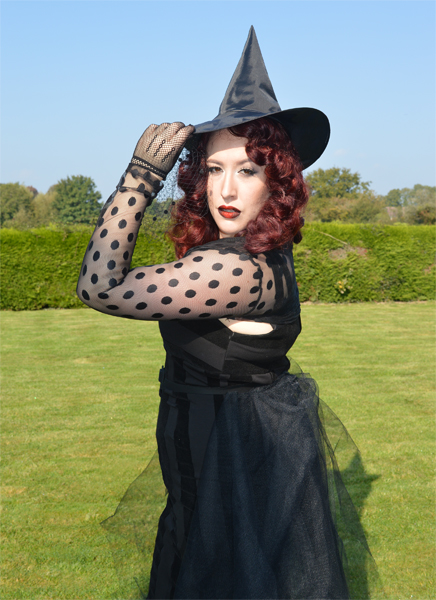 I wore the Queen of Heartz Vamp dress in black, a Lindybop polka dotted sheer shrug, a PUG slide belt, black crochet gloves, a birdcage veil underneath the aforementioned 50p witches hat (Asda,) black spiked stiletto heels, and I pinned some black tulle I had lying around under the belt at the back to make a witchy bustle. For my makeup I added darker shadow into my crease, lined under my eyes, which I almost never do, used a grey-brown to add deep contouring under my cheeks for that hollowed look, and used Makeup Academy Luxe Velvet Lip Lacquers in Reckeless (in the centre) and Potent (blended from the outer corners in) to create the ombré lip. I left my pincurls brushed out as I usually would, but you could get as creative as you want with crafting a gorgeous killer vintage do or taking the witchery to some frizzy and scary hair places. I forgot to put my seamed stockings on as I was excitedly layering up the look, but that would be a must for the vintage feel.

As you can see, you can use anything for this costume, really. Black goes, but so do any dark colours, such as maroons, purples, greys, brown, green, whatever you like. You most likely, just like I did, have most of what you need to throw together a pinup witch costume without needing to buy anything, but just in case you did want a little help or you’re using it as an excuse to buy something new that you can rewear after Halloween, here’s a little gallery of pieces that could work.

Monroe Top in Black from Doll Me Up Darling $21

Vixen Vondetta Top in black from Doll Me Up Darling $19.99 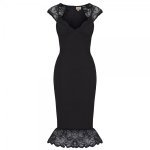 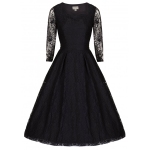 Lisette dress in Black from Lindybop £29.99

Diva Jacket by Heart of Haute $68

What are you waiting for? Halloween is almost here, get costuming!

I leave you with this P.S. that it is hard to get a good witches cackle in a picture without looking like you are normal laughing or fake crazy laughing. Awks. 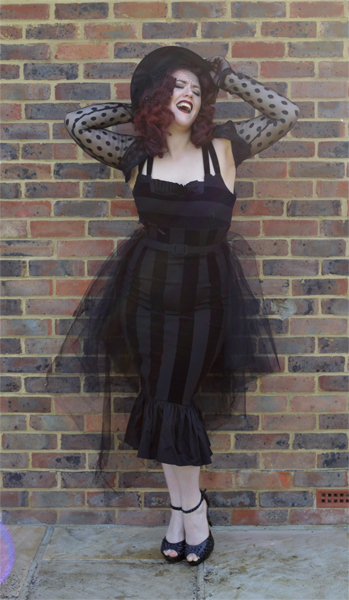