If you missed last week’s posting kick off my Hogwarts Houses Vintage Style series, you can find it here. I began by styling a Hufflepuff themed outfit and by telling the story of how I got into the Potter series. This week I’m focusing on Slytherin, the house for which I would be most ill-fitted, and touching on how the series lead me to make new friends and deal with my dad’s death. 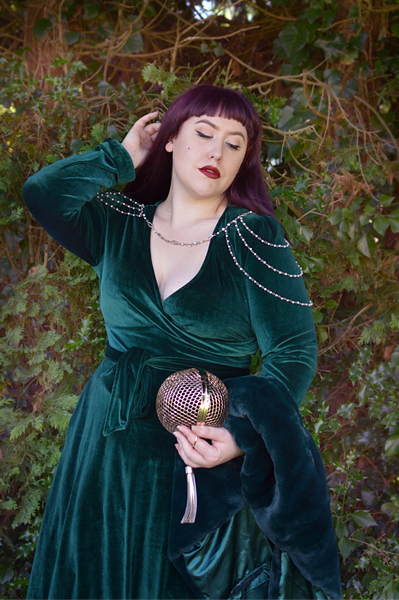 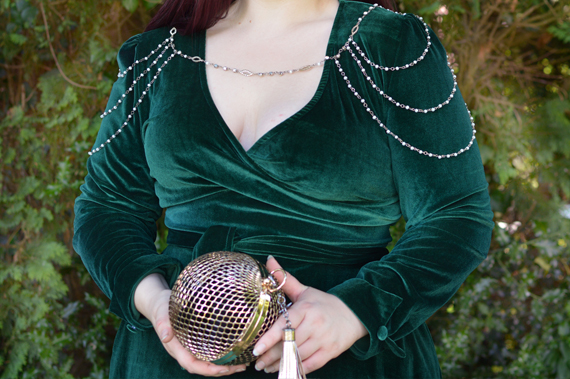 There were so many different directions I wanted to take this Slytherin ensemble, from a black tailored mermaid-skirt suit set with only pops of green to a multi-layered casual look of different green tones topped with a green or silver wig. In the end, though, I thought about the way I would feel if I was a Slytherin, and the Slytherin version of Amy would be slinky, sassy, and luxurious. As such, I actually began with this ornate multi-chained décollatage neck-piece I made a few years ago, because it felt both extra AF and cool enough to earn Slythie points. I chose this Dolly & Dotty dress for the obvious green colour but also for the luxe feel velvet gives every outfit. Adding yet more green soft-textures with the faux fur stole felt like it exaggerated the lavishness of the look, while the gold metal ball clutch added more glitz, with very little practicality. I opted for silver shoes to represent the silver of the house colours, and finally I decided a sleek, straight wig would feel sexy and unexpected, which I feel is a very Slytherin vibe to excude.

Slytherins In My Life

My UKHP OG Potter friend Mand, my blogger friend Cici Marie, my babe Sophie, my brother-in-law, and my eldest sister. And, even though she’s not read the series, I reckon my friend Steph is also a Slythie.

My Dad’s Death and the Friends I Made Through Potter

I touched on it a little bit in last week’s story of how I got into the Potter series, but today I’m going to share with you the background of how Harry Potter came into my life at its worst point, and how that lead me to make friends I could never have predicted.

It was in the summer between my first and second years of college that I discovered and fell in love with the books. When I began my second and final year of college that September it was a very different experience to my first year, as all of my friends bar one had either quit school or moved away. That left me with one friend in college, but because of the horrendously poor state of the transportation links between my tiny rural village and the campus, and because said friend had a slightly different class schedule to me and access to regularly running trains to get her to school and home again promptly, I spent much of that year alone waiting around before or after lessons for hours at a time. Seriously, hours.

My bus would arrive 1-2 hours before my first lesson and leave to take me home 1-2 hours after my final class. I was socially anxious, shy with new people, and not sure how to fill my time, leading to a very lonely year wandering round the town buying new DVDs or CDs, holing up in a study cubby at the library to read a novel, or just sitting on the floor outside my next class waiting for it to begin. I felt like a loner and a loser, even though I had plenty of friends–they just didn’t go here anymore. So I spent most of my time during the day alone, feeling isolated yet conspicuous because of it, and then I went home.

To my dying dad.

He’d been ill for two years by the time he died in late November that autumn. And because I had papers to write and exams to sit and grades to earn, through the devastation I just had to get on with it all. I probably adapted weirdly well to his no longer being around to an outsider looking in, despite the fact that I wore his button down pyjamas to bed every night and began to use his knife (boned handled, rounder at the tip than my granddad’s, who also died less than two months later) at meal times. In reality, I think my schoolwork kept me focused and Potter threw me a lifeline. Because less than a month after his death, I found them; my Potter friends.

I don’t even remember now what I was looking for online early that December when I found UKHP, a British Potter forum that became my online home. Over the next few weeks, I and several other newbies to the forum began to get acquainted with the site and with each other, realising we all seemed to be online around the same sort of time. By spring we had formed a small digital gang of 6 friends, our locations scattered throughout England and America, our largest common interest Harry Potter.

While my weekends were spent waitressing, my evenings on my college work, and my days mostly alone on campus, my early mornings were spent at the computer IMing with these people who, over time, became close friends. Amanda, Charisse, Oz, Stephen, Rachel and I would all talk Potter, nonsense and everything else in between in group AIM chats (I know, remember AIM?) very early first thing every morning (well, my time, at least.) Talking to them made me laugh and smile, and in all likelihood helped get me through that year when there was a lot that could have led me to fall apart.

This winter it will be 15 years since I first logged on to that forum, with no idea I was about to make friends who would still be in my life over a decade later, friends I would meet in different countries, whose big life moments I would be lucky to be a part of. The first time I picked up Goblet of Fire to give it a semi-reluctant try, I could not have had any clue as to where and to whom it would lead me. Who knew the cupboard under the stairs fit so many people?

Um…is fucking none of them an answer?!

I’ve always struggled with understanding people whose favourite characters are Slytherins, and yet somehow a large proportion of my Potter friends seem to be exactly these kind of people. Thankfully they can all at least admit that Snape is trash even if he’s a hero, and is (as pointed out to me recently,) definitely an incel, which blew my mind. Many of them love or at least strongly sympathise with Draco, something I struggle with because while I credit him for enabling the trio’s escape from Malfoy Manor near the end of Deathly Hallows, I still believe he could have made a more decisive stand in coming over to the good side of the fight during The Battle if he was truly as conflicted as everyone made him out to be.

So, I have no love for Snape and Draco, and god knows I don’t like Bellatrix or Voldemort. Already that doesn’t leave a huge number of Slytherins who we realistically know enough about to be in contention for my favourite Slytherin. Which brings me to Slughorn and to Regulus Black. Slughorn’s ‘collection’ of talented people as a way to wield power and enrich himself with gifted luxuries is at best clever manipulation by a person too lazy to seek real power, and at worst pretty creepy, selfish and judgmental. The fact that he overlooked Ron so quickly and readily will always sour me to him, but I admit there’s something a bit charming and soft about him that I don’t mind–whether that is affected by Jim Broadbent’s fabulous portrayal in the movies, I can no longer tell after all this time.

And so, there’s Regulus. It’s odd for a favourite to be a character we never actually ‘met’ in the books, but the care he showed Kreacher, his concern for the safety of his family, and the moral fortitude he showed in sacrificing his life at such a young age to help halt Voldemort’s growing power after doing the difficult internal work of mentally renouncing the dark side are all actions and traits I consider kind and heroic respectively. I would have loved it if Sirius could have learned the truth about his brother’s death before he too died, but the fact that we learned it is gem enough.

Why I Love Slytherins

If you’re an anxious person, having a Slytherin around is a blessing, because even if they too are anxious, they will summon their inner cunning and decisiveness to deal with whatever is stressing you out, no matter the situation. If your train gets cancelled, it will be the Slytherin who finds a way for you all to get home, and they probably won’t get mad at you if you cry about it, especially if you’re a Hufflepuff, because then you’re their Hufflepuff. The Potter fandom comes up with some adorable and brilliant headcanons on the regular, but one of my favourites is the recent emergence of the realisation that Slytherins and Hufflepuffs make great best friends. Since I would be a Hufflepuff were I to be sorted now in adulthood, and since at least 3 of my close friends are Slytherins, I think there’s something to that theory.

So what say you about Slytherin house? Was it badly portrayed in the books, who’s your favourite Slytherin, are you a Draco fangirl…and why? How do you feel about Snape? Have you made a bunch of friends through the series? Let’s get chatty in the comments!