Malco Modes is America’s oldest and largest maker of quality petticoats, pettipants and crinolines, having been in business for over 50 years with each piece hand-sewn in their eastern Tennessee facility. Their Jennifer petticoat was my first ever good quality petticoat as a pinup, and a year and a half later it’s still in perfect condition despite regular use. It’s the softest, fluffiest petticoat I’ve ever touched, and I do make a habit of touch testing as many petticoats as I can to compare–you know, not to sound creepy or anything.

The Jennifer is a great everyday petticoat because it’s got medium volume and isn’t too long or too short, meaning it works well for the average pinup. I, though, am a queen of puff. A master of fluff. I love my skirts big and bold and a little bit obnoxious, even. I’ve yearned to try the Malco Modes Michelle petticoat since I first got my Jennifer, recognising it as the superlative among petticoats in circumference, but I’ve been told by the helpful lovelies at Malco Modes that the Michelle is so full it will only fit under skirts with a minimum of 140 inches hem circumference, which excludes a lot of your average repro pieces. Being sensible, I perused the Malco Modes range of fuller pieces and decided the Madeline seemed like an excellent comprise between hem-busting volume and daily pinup practicality.

It might sound silly, but I was excited to get this in red. I only own black and white petticoats, because they go with everything and I’m not someone who likes my petticoat to peek out from under my skirts anyway. Still, despite that, I found myself wanting the option of something colourful just for the fun of it, and Malco Modes definitely offer that. Every single one of their petticoats comes available in multiple colours, with up to 25 different colours available in their most popular styles. This ruby red was made for me and my obsessively red-accessorizing ways.

Worn with the Jennifer petticoat by Malco Modes 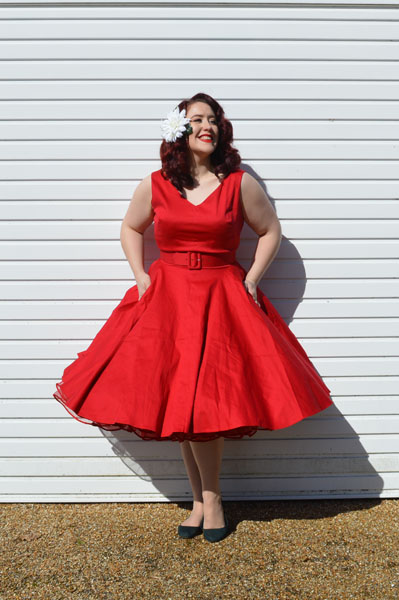 Worn with the Madeline petticoat by Malco Modes 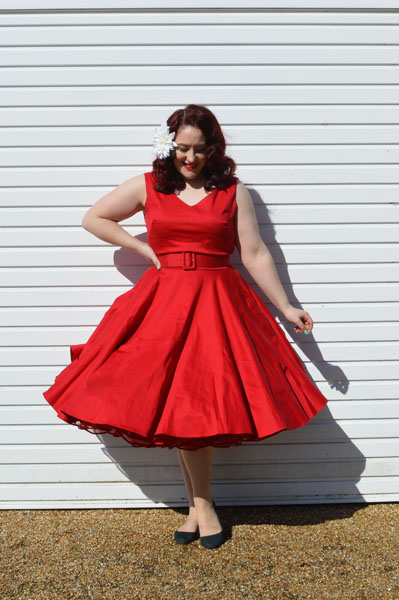 I expected this petticoat to deliver on volume, yet I didn’t expect it to be quite so full and incredible. The first time I put it on, it surprised even me, Puff Queen that I am. It’s amazing, particularly given it’s only their second fullest petticoat behind the Michelle (how?!!)

Technically it’s a crinoline, which means it’s made from stiffer materials than a petticoat, which is typically softer. Cheap, bad-quality crinolines are often scratchy, stiff and uncomfortable because they use rougher materials to achieve the stiffness required to achieve the fuller volume. This Madeline petticoat, however, produced by a company committed to good quality produce, doesn’t leave you suffering any of that scratchy discomfort. The full volume is achieved by one layer of stiff nylon netting sandwiched between two layers of soft nylon organza, with satin binding on the edging of each layer. Altogether, there’s 60 years used to achieve that perfect fullness, with those softer top and under layers making this piece comfortable and gentle to wear. Never again will volume necessitate the abandonment of comfort, as I had previously believed!

The sizing of the Madeline runs from petite to X large, with each size allowing a waist range of 10 inches or more inside that size, since the waistband of each skirt sports a button that can be moved along to tighten or loosen the fit. Each size also increases slightly in length, so the petite Madeline can cater to 21-38 inch waists at a petticoat length of 19 inches, while the large runs from 27-50 in the waist and 23 inches long. I ordered the large to get that extra little bit of length. That does mean it is too short to be worn at my natural waist for my longer dresses or skirts, like this pictured Havana dress, but I easily combat that by shifting the skirt down a little to be worn on my hips.

The Madeline petticoat comes available in 15 colours and costs $64.99. I’m so thrilled it not only fulfilled but exceeded my high expectations, but I’m even happier to be able to bring you another Malco Modes giveaway!

Thanks to Malco Mode’s generosity, this giveaway is open internationally and offers the winner a Malco Modes petticoat of their choice. The giveaway begins today, Wednesday 30th March, and ends Tuesday 5th April 12am GMT.

To enter, you can gain multiple entry points for the following actions:

You can do all 4 of these things to gain an entry for each, meaning you can have up to 4 entries into this competition, increasing your chance of winning. All of these entry options can be logged into the giveaway widget below:

Winner will be announced here on the blog on Wednesday 6th April.