I don’t do a lot of event or experience based posts on the blog because, quite frankly, my life is just not that interesting; I go to work Monday to Friday like your typical worker bee, I spend a lot of my free time with my family and friends, and then another chunk of time on this blog focusing on the fun not-so-usual style aspects of my life. But occasionally I have something cool I get to share with you, and this time it’s my recent experience modelling for Voodoo Vixen.

My fellow British Belle Amber and I were both asked to be part of a Spring/Summer campaign lookbook for VV in early June and we were thrilled to say yes. Taking a day off work, we travelled up to London for a vintage picnic themed shoot early on a Tuesday morning with our hair in pincurls and the usual London commuters staring. The shoot was in east London, east enough that the Londoners on the team considered it Essex while wee country bumpkin that I am still resolutely saw the London around us.

Shooting in public is always an interesting and amusing experience because people can have curious reactions to stumbling upon a photoshoot in action. On our very first set up, with Amber and I posing against a downed log near a pond, a group of small primary school children were ushered past us on a school trip…and were all lined up and sat down on a small hill immediately facing us, for no other apparent reason we could gather than to have a look at what we were doing.

We had five outfits to shoot during the course of the day, something that’s totally do-able and yet harder than that probably sounds if you’ve never been on a shoot before. In this particular instance, shooting outside on a windy and intermittently cloudy day meant the main thing that took up time wasn’t the switching between setups and changing props, or even changing clothes (especially since Amber and I literally opted to change in a clump of trees to save time walking back and forth to our nearby wardrobe base 5 minutes away). No, the adjusting and waiting that had to be done was all about minimising the impact that the fickle British weather had on the pictures. We had to wait out breeze bursts that disturbed our hair sets, chat amongst ourselves while the whole team waited for the burst of bright sunlight to pass because we learned early on that by the time our fabulous photographer adjusted her camera settings for the dozenth time the sunlight would have inevitably passed and we would have had to reset once more.

I’d never done a photoshoot alongside another model before, so it was interesting to watch the photography and style team decide what dynamic would work for each set up and what qualified as the right amount of interactivity between Amber and I and what looked too posey or too much like mirroring one another. Getting to experience that with someone I was already friends with meant we felt totally relaxed and comfortable together without the added awkwardness of having to say to a stranger ‘oh, sorry’ a few dozen times as you have to lean on them here or rest against them there.

I’m wearing the Jade Kat, Amber’s in a soon to be released dress

The Voodoo Vixen team is definitely made up of our kind of people, it has to be said, as they spent a lot of the day resisting their desire to eat the cakes they had brought for the props; I’m proud of you for that one, lovelies, for realsies.

While everyone else wanted the cakes, I mostly wanted there to be no appearance of rain. Well, no rain and for the wind to go away–even though our photographer Kristina said she thought it was cute how much I looked like a granny in the headscarf I doned between set ups to try to keep my hair in tact, I was not a fan of the look.

You’d think food on a photoshoot might be near non-existent, maybe involving salads and something else depressing, but with VV we ate chips, burgers, and, yes, eventually some cake. There’s a good chance this means we’re doing modelling wrong–but if that’s the case, I’m cool with that. Give us the chippy break, thanks. 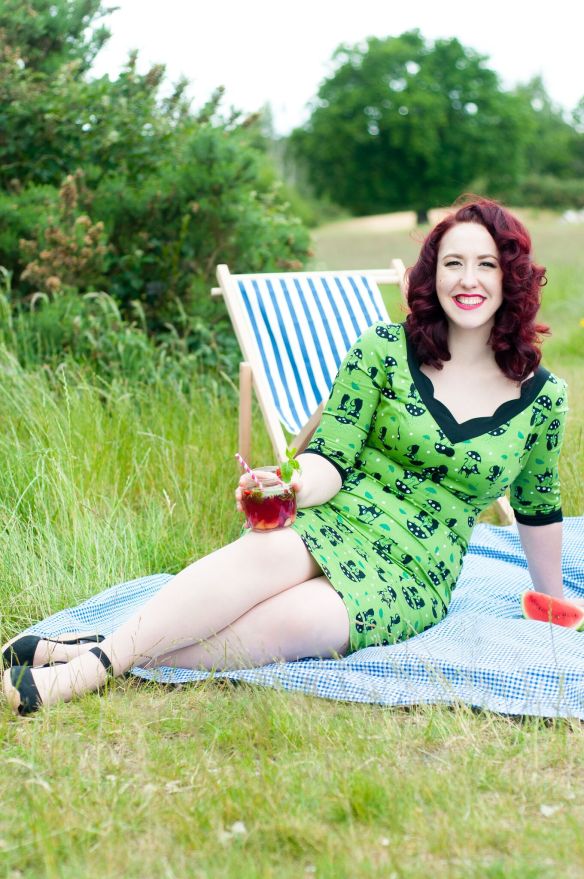 Kickin’ it in the Jade Kat dress

Our final outfit set involved my finally getting to shimmy into the Gwyneth dress, a nautical print wiggle dress, after a day of looking forward to trying it on, and the nearby huge lake sporting rental boats. “How would you girls feel about trying some shots on the boats?” Nicki asked us. “Let’s do it!”

It turns out the walk round the lake trying to find the boats was the hardest part of that shoot–we inadvertently went the wrong way round, the long way round, lugging the picnic basket, camera equipment, deck chair, blankets and all the clothes between us, probably looking a bit like a gaggle of tired, overloaded children to the people we passed. Unexpectedly long walks laden down with shoot props aren’t fun, but it was nice to turn around and see a group of people all pitching in, carrying the load together, literally, in a joint venture to achieve a good shot.

The truth is the person who did the most hard work for the boat shots was the young lad who had our row boat on a chain–yes, literally. He had to keep pushing us back out into the waters when the wind carried us back to shore within 30 seconds of the last push. As if I hadn’t already dispelled the notion that photoshoots are glamorous. Didn’t you read the bit about us changing in the bushes?

The boat set up was my favourite scene and now that we’ve had the pictures back I can say it’s my favourite picture, too. I’m so glad the team decided to try out something that could have flopped given the wind and the logistics.

Amber in the Kensington dress, I’m in the Gwyneth

A massive thank you to Voodoo Vixen for having Amber and I, and for taking such good care of us. We had a wonderful day doing something fun and interesting with a group of lovely ladies who made us laugh and feel at home, and really, how can you get any better than that? Oh, right; by having pretty pictures to show for it. Thanks for that too, VV ❤

5 thoughts on “Vixen In Training [Modelling for Voodoo Vixen]”